The Nayabaru are a species descended from Earth's iguanodonts. As a culture, they fear death, criminalising suicide, and are more accepting of someone torturing another than they would be of a mercy killing. (Though, don't misunderstand, torture is still not cool, it's just much better than murder.)

They are the dominant sapient species on Nekenalos. As a culture, they are terrified of the kavkema and fairly dedicated to capturing the last of them and locking them away somewhere safe. 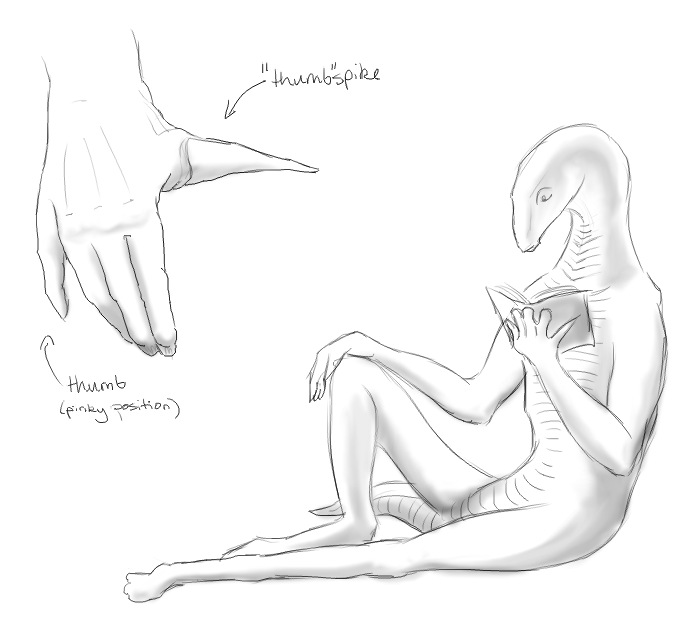 Nayabaru are covered by very small scales, giving them a fairly smooth skin. The colouration of the skin ranges from ochre to a reddish-brown. Their irides are predominantly blue (~55%) and green (~40%), with the occasional light amber.

Nayabaru mutual strangers usually greet each other properly after the initial address with a customary handshake: With the thumbspike pointed toward one's own chest, their opposable digit is offered to the other party for interlocking with their own. There are two social variants of the handshake expanding to three variants for individual Nayabaru: 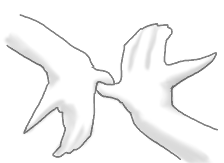 The first is the neutral one, where a Nayabaru's palm points to either their left or right side. The chiral designation of the hands is unimportant - Nayabaru are ambidextrous and assign no connotation to their right hand that their left does not also have, and vice versa. The orientation of fingers is also unimportant - they can point in the same or opposite direction of their greeting partner's, depending on which position is more comfortable. The standard hand-shake is of hands of matching handedness (i.e. right to right, or left to left), with the remaining non-spike fingers pointing upward, but other constellations are entirely conceivable (see image).