Nekenalos is a planet in a binary star system populated with creatures once taken from Earth. Most prominently, it's home to the Nayabaru and the kavkema, which are product of the Threadwielders Ysikary and Evenatra, respectively.

The main star of the system (Mekiva) is slightly larger than Earth's sun, and is the only of the two stars to be considered 'sun' by the inhabitants of the planet. The other star (Daskuvar) is a dim red dwarf that makes Nekenalos' night-time vary in illumination a bit more strongly than a moon would, depending on its position in orbit at the time and its visibility (if any - it's rarely around) from the night side of the planet. It registers to the inhabitants in much the same way a moon would, and the two cultures' early planetary misconceptions had it weave a complex orbit around Nekenalos rather than a simple one around their sun. Nekenalos itself has no actual moons.

It has a volume of around one and three quarter Earths (i.e. a radius roughly one a quarter times Earth's) but not significantly more mass or gravity, since the iron core of the planet is only about 20% of its radius. It is spinning gradually and generating a magnetic field, but this is weaker than Earth's.

Nekenalos' atmosphere is a touch thicker (as in, spanning more altitude) than Earth's and laced with more carbon dioxide. Coupled with its slightly increased proximity to the primary star, Nekenalos has a hotter climate on average than Earth does, and possesses no permanently icy poles. The altitude temperature gradient is comparable to that of Earth, making even equatorial mountains quite chilly. The weather tends to favour thunderstorms, and one of the biggest threats to certain areas are bushfires started by lightning strikes. Since Nekenalos has no notable wobble to its orbit, seasons are non-existent. 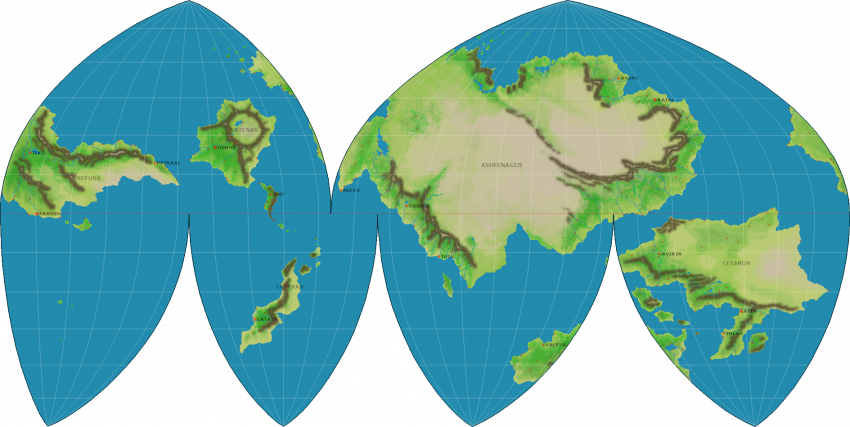 Continents on Nekenalos, ordered from largest to smallest: