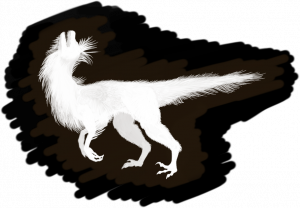 The kavkema are a (largely nocturnal) species descended from Earth's dromaeosaurids. As a culture, they try to avoid any form of prolonged suffering and prefer swift, painless deaths over it if the choice must be made. As such, they are cowed into passivity by the Nayabaru, whom they chiefly try to desperately avoid given what's likely to happen to them if they're caught.

They're a minority on Nekenalos, to the point where Threadwielders other than Evenatra occasionally dismiss them as extinct - after all, give a few millennia, and they will be.

The kavkema have moved from the original dromaeosaurid habitats of grasslands up into mountainous regions, where their feathery coat allows them to keep in heat and they're reasonably far away from the areas the Nayabaru would find naturally appealing. As such, they are accustomed to seeing snow despite it being an oddity on Nekenalos as a whole due to the planet's climate.

Owing to their habitat, kavkema are largely brown and white in colouration, though albinism is barely selected against (the sole trouble with that is the resulting hypersensitivity of the eyes, but for a nocturnal species this only makes some nights troublesome) and the albino population is thus reasonably significant. Their irides are brown with little variation and their eyes have no pronounced, expressive whites. While a roughly 50/50 ratio of browns and whites in their overall appearance is normal, the range does go from 90/10 brown/white all the way to 30/70 brown/white (in non-albinistic individuals).